• Snorkel in crystal clear rivers with fish, giant otters and maybe even a green anaconda
• Raft of the Rio Formosa looking for wildlife
• Watch macaws and other birds at Buraco das Araras
• Rappel into the cave of Anhumas Abyss and dive in the lake below

There is a place on earth which, when I describe it, you might think it’s a mere collage from a fairytale of old; a place where kaleidoscopic birds display aerobatic dances in a vast prehistoric sinkhole and cathedral sized caves have statues conceived so intricately by nature that you’ll experience more wonder than in any place of worship.  Here, rivers and lakes exist where the water is so clear; you have to remind yourself not to inhale.  Exotic fish almost bump into you, they are so plentiful in these waterways, and comical capuchins perform branch ballet over your head.  But, like all great fairytales, a fear-inducing, almost mythical, mammoth serpent inhabits this land.  Only the brave will seek it and only the lucky will spot it.  With all this bewitchment, it’s no wonder they call this place……..Bonito 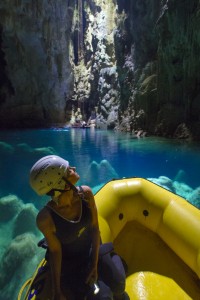 Bonito is located in the Brazilian state of Mato Grosso du Sul and found fame as an ecotourism destination in the 1990s. It is frequented by people from all over Brazil but is still a relatively unheard of place for foreigners. What makes Bonito such an ideal spot to visit is its range of activities. From rafting, diving, snorkelling, climbing rappelling to wildlife watching and lounging by resplendent rivers; Bonito has it all. For people who enjoy searching for indigenous animals, but don’t want to spend an entire trip waking up at dawn to dress in camouflage, Bonito offers the ideal mix of relaxation, adventure and wildlife bucket list photo opportunities. It’s less famous for spotting creatures than the Pantanal region of Brazil, but you can see endangered Giant Otters, Capuchin Monkeys, Toucans, the bizarre looking Giant Anteater, vulnerable Brazilian Tapirs, Macaws and Caimans to name just a few. It is believed to be the best place in the world to see the afore mentioned Green Anaconda (especially in the month of August – the Brazilian winter) and swimming in the crystal clear water with the largest snake species on this planet is a holiday boast that nobody can top! 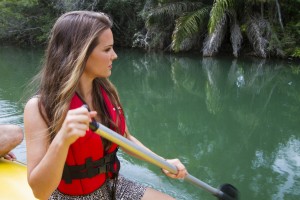 As a conservation success story, Bonito is an excellent example.  Before the 1990s, most of the region was cattle farms where a great deal of the natural vegetation had been cut down for grazing.  However, once the rivers, lakes and caves were discovered for tourism potential, many farmers started to open up their land to visitors.  Now, these land owners earn far more from tourism than from selling meat and have allowed the natural vegetation to re-establish.  Bonito is scattered with Private Reserves of Natural Heritage and these will hopefully increase with the number of responsible eco-tourists

To get to Bonito, you’ll need to fly from São Paulo to Campo Grande (a 2 hour flight). There are many ways to get to

Bonito from Campo Grande but I would suggest hiring a car and driving as, once you’re in Bonito, most of the attractions are a short drive from the centre of town. I stayed at Pousada Olha D’Agua which is just outside the main strip, has exceptionally helpful staff and some resident wildlife! As is the case in most of Brazil, lots of the tour guides don’t speak English so I’d highly recommend booking an English speaking guide for your stay. My guide was Daniel De Granville who is not only a passionate naturalist but a renowned wildlife photographer. You’ll only need 4 full days to see the delights of Bonito so, if you want to see even more wildlife (including jaguars), you can combine this with a visit to the Pantanal. Or, if you’ve scratched you’re twitching itch, Rio de Janeiro will offer you a huge contrast to the tranquilly of Bonito.